The use of computational tools in the early stages of drug development has increased in recent decades. Machine learning approaches have been of special interest, since they can be applied in several steps of the drug discovery methodology, such as prediction of target structure, prediction of biological activity of new ligands through model construction, discovery or optimization of hits, construction of models that predict the pharmacokinetic and toxicological (ADMET) profile of compounds, and assessment of mechanism of action and identification of new targets for further research. .

Two public domains, NCBI and ChemBl hold millions of experimental records accessible to the whole biomedical community. The websites support applications to facilitate access to results for limited number of assays or molecules, but they also allow downloads of the database components, sometimes, of the database itself.

This web is an attempt to present an overview on some applications of ML techniques in construction of classification and/or prediction models of biological activity, identification of mechanism of action of molecules active in phenotypic assays and unveiling of potential new targets through pathways analysis.

Predictive analytics deployed in this site

Let’s se now where these activities can fit along the drug disc. overy process

From Wikipedia, the free encyclopedia
In the fields of medicine, biotechnology and pharmacology, drug discovery is the process by which new candidate medications are discovered. Modern drug discovery involves the identification of screening hits, medicinal chemistry and optimization of those hits to increase the affinity, selectivity (to reduce the potential of side effects), efficacy/potency, metabolic stability (to increase the half-life), and oral bioavailability. Once a compound that fulfills all of these requirements has been identified, it will begin the process of drug development prior to clinical trials. Modern drug discovery is thus usually a capital-intensive process that involves large investments by pharmaceutical industry corporations as well as national governments.  The “final product” of drug discovery is a patent on the potential drug. The drug requires very expensive Phase I, II and III clinical trials, and most of them fail. Small companies have a critical role, often then selling the rights to larger companies that have the resources to run the clinical trials. Discovering drugs that may be a commercial success, or a public health success, involves a complex interaction between investors, industry, academia, patent laws, regulatory exclusivity, marketing and the need to balance secrecy with communication.[3]
The process involves the following phases: 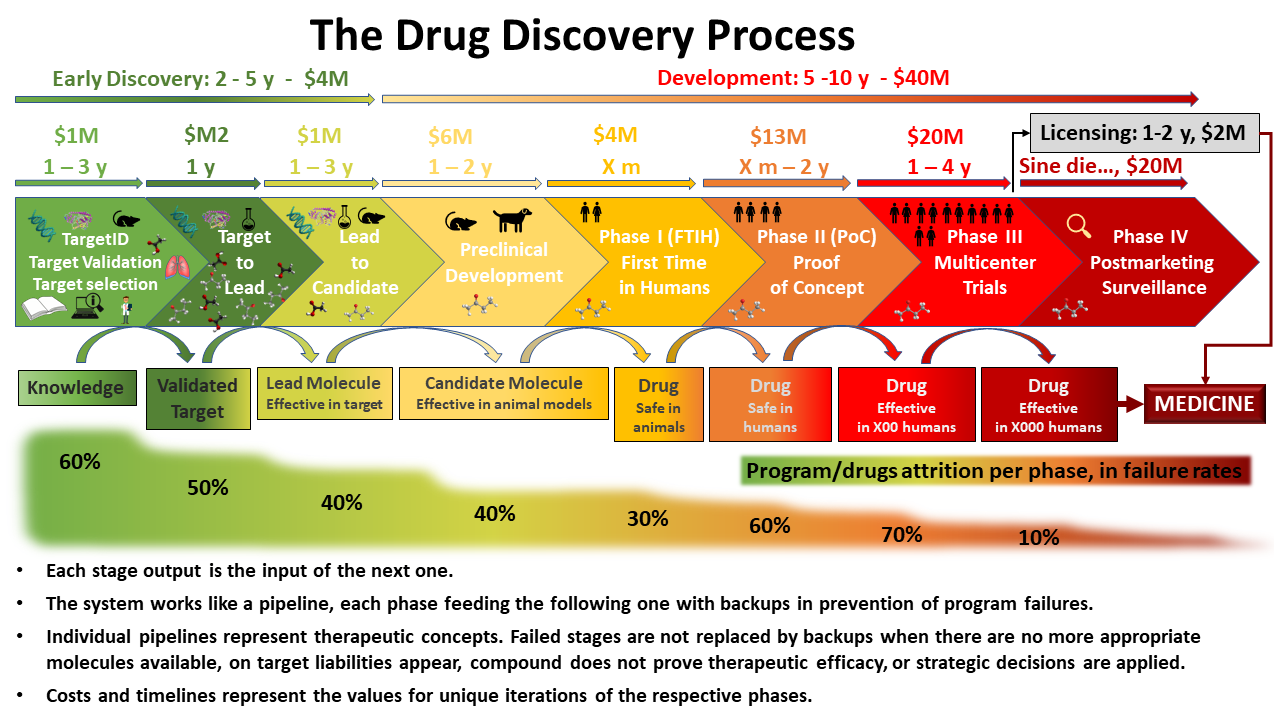 The definition of “target” itself is something argued within the pharmaceutical industry. Generally, the “target” is the naturally existing cellular or molecular structure involved in the pathology of interest that the drug-in-development is meant to act on. However, the distinction between a “new” and “established” target can be made without a full understanding of just what a “target” is. This distinction is typically made by pharmaceutical companies engaged in discovery and development of therapeutics. In an estimate from 2011, 435 human genome products were identified as therapeutic drug targets of FDA-approved drugs.[12]

“Established targets” are those for which there is a good scientific understanding, supported by a lengthy publication history, of both how the target functions in normal physiology and how it is involved in human pathology. This does not imply that the mechanism of action of drugs that are thought to act through a particular established target is fully understood. Rather, “established” relates directly to the amount of background information available on a target, in particular functional information. The more such information is available, the less investment is (generally) required to develop a therapeutic directed against the target. The process of gathering such functional information is called “target validation” in pharmaceutical industry parlance. Established targets also include those that the pharmaceutical industry has had experience mounting drug discovery campaigns against in the past; such a history provides information on the chemical feasibility of developing a small molecular therapeutic against the target and can provide licensing opportunities and freedom-to-operate indicators with respect to small-molecule therapeutic candidates.[citation needed]

In general, “new targets” are all those targets that are not “established targets” but which have been or are the subject of drug discovery campaigns. These typically include newly discovered proteins, or proteins whose function has now become clear as a result of basic scientific research. 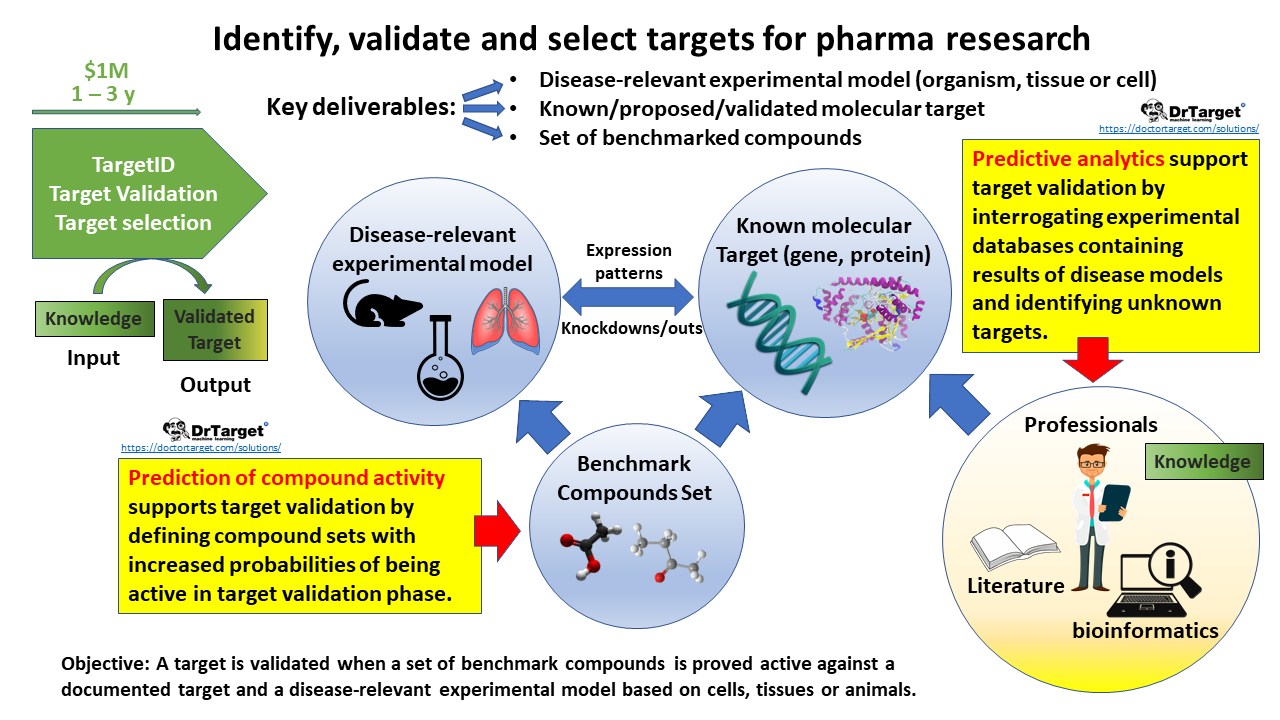 The process of finding a new drug against a chosen target for a particular disease usually involves high-throughput screening (HTS), wherein large libraries of chemicals are tested for their ability to modify the target.

It is very unlikely that a perfect drug candidate will emerge from these early screening runs. One of the first steps is to screen for compounds that are unlikely to be developed into drugs; for example compounds that are hits in almost every assay, classified by medicinal chemists as “pan-assay interference compounds“, are removed at this stage, if they were not already removed from the chemical library.[13][14][15] It is often observed that several compounds are found to have some degree of activity, and if these compounds share common chemical features, one or more pharmacophores can then be developed. At this point, medicinal chemists will attempt to use structure-activity relationships (SAR) to improve potency, selective and ADME properties of the lead compound. in a process that will require several iterative screening runs. 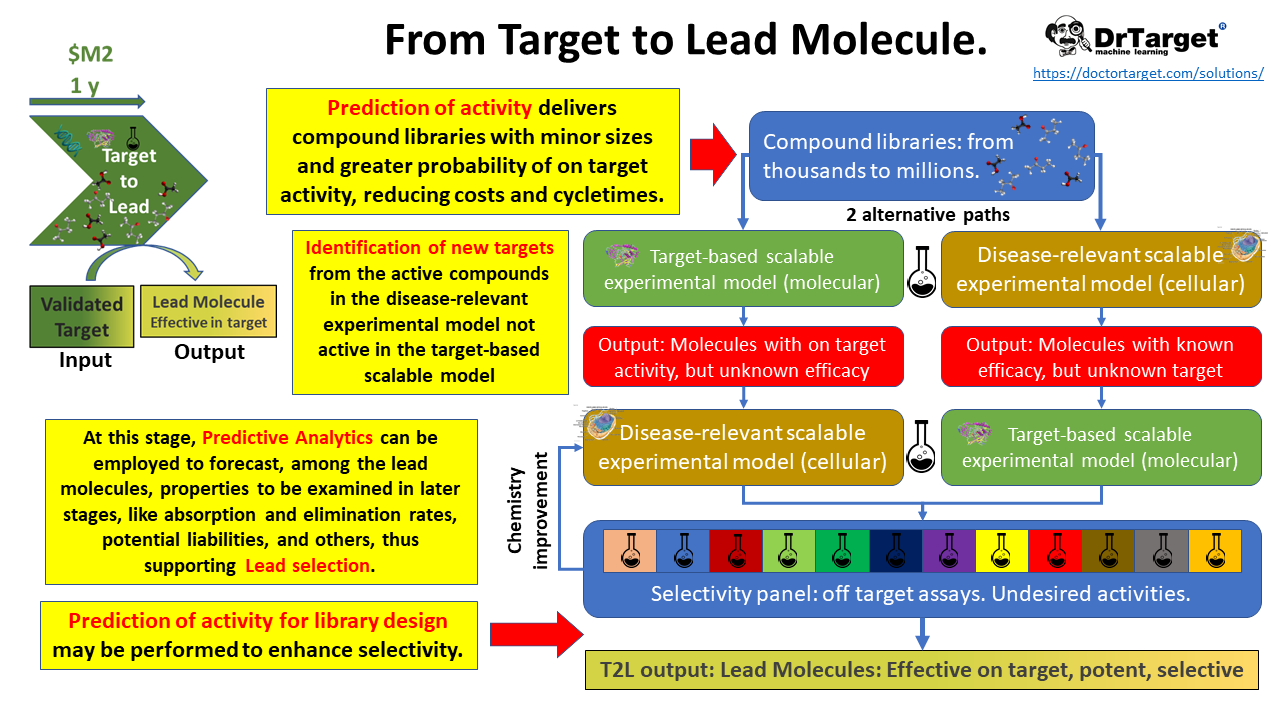 Selection of a Development Candidate

A development candidate is a molecule for which the intent is to begin Phase I evaluation. Prior to submission of an IND, the project team must evaluate the likelihood of successfully completing the IND-enabling work that will be required as part of the regulatory application for first in human testing. Prior to decision point #7, many projects will advance as many as 7-10 molecules. Typically, most pharma and biotech companies will select a single development candidate with one designated backup. Here, we recommend that the anointed “Development Candidate” be the molecule that rates the best on the six criteria below. In many cases, a Pre-IND meeting with the regulatory agency might be considered. A failure to address all of these by any molecule should warrant a “No Go” decision by the project team. The following criteria should be minimally met for a development candidate:

How can predictive analytics help at these stage?

Strong regulatory constrictions for activity, but still, within safety margins can be used to: 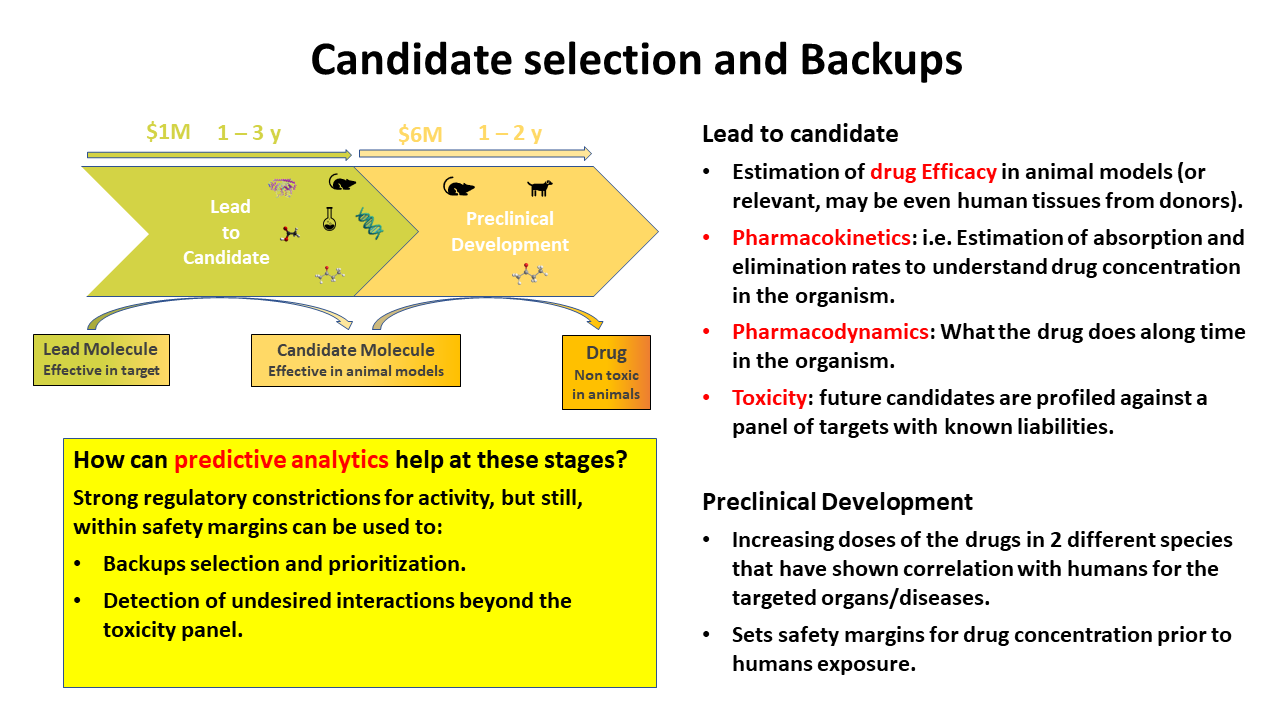 Clinical trials involving new drugs are commonly classified into four phases. Individual trials may encompass more than one phase. A common example of this is combined phase I/II or phase II/III trials. Therefore, it may be easier to think of early phase studies and late phase studies.[1] The drug-development process will normally proceed through all four phases over many years. If the drug successfully passes through Phases I, II, and III, it will usually be approved by the national regulatory authority for use in the general population. Phase IV are ‘post-approval’ studies.

Phase I trials were formerly referred to as “first-in-man studies” but the field generally moved to the gender-neutral language phrase “first-in-humans” in the 1990s;[5] these trials are the first stage of testing in human subjects.[6] They are designed to determine the maximum amount of the drug that can be given to a person before adverse effects become intolerable or dangerous. Normally, a small group of 2–100 healthy volunteers will be recruited.[2][6]

Once a dose or range of doses is determined, the next goal is to evaluate whether the drug has any biological activity or effect.[1] Phase II trials are performed on larger groups (100–300) and are designed to assess how well the drug works, as well as to continue Phase I safety assessments in a larger group of volunteers and patients.

This phase is designed to assess the effectiveness of the new intervention and, thereby, its value in clinical practice.[1] Phase III studies are randomized controlled multicenter trials on large patient groups (300–3,000 or more depending upon the disease/medical condition studied) and are aimed at being the definitive assessment of how effective the drug is, in comparison with current ‘gold standard’ treatment.

A Phase IV trial is also known as postmarketing surveillance trial, or informally as a confirmatory trial. Phase IV trials involve the safety surveillance (pharmacovigilance) and ongoing technical support of a drug after it receives permission to be sold (e.g. after approval under the FDA Accelerated Approval Program).[15] 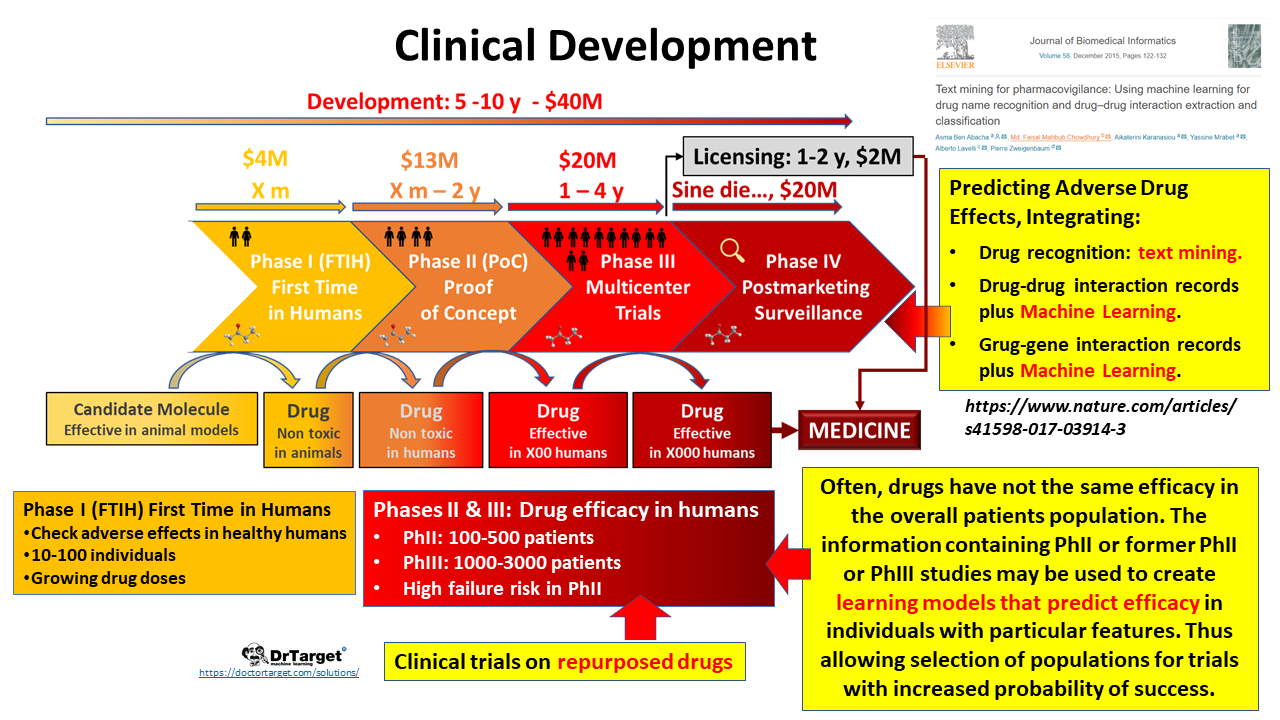 The chart below summarizes the most described applications of predictive sciences along the drug development process. 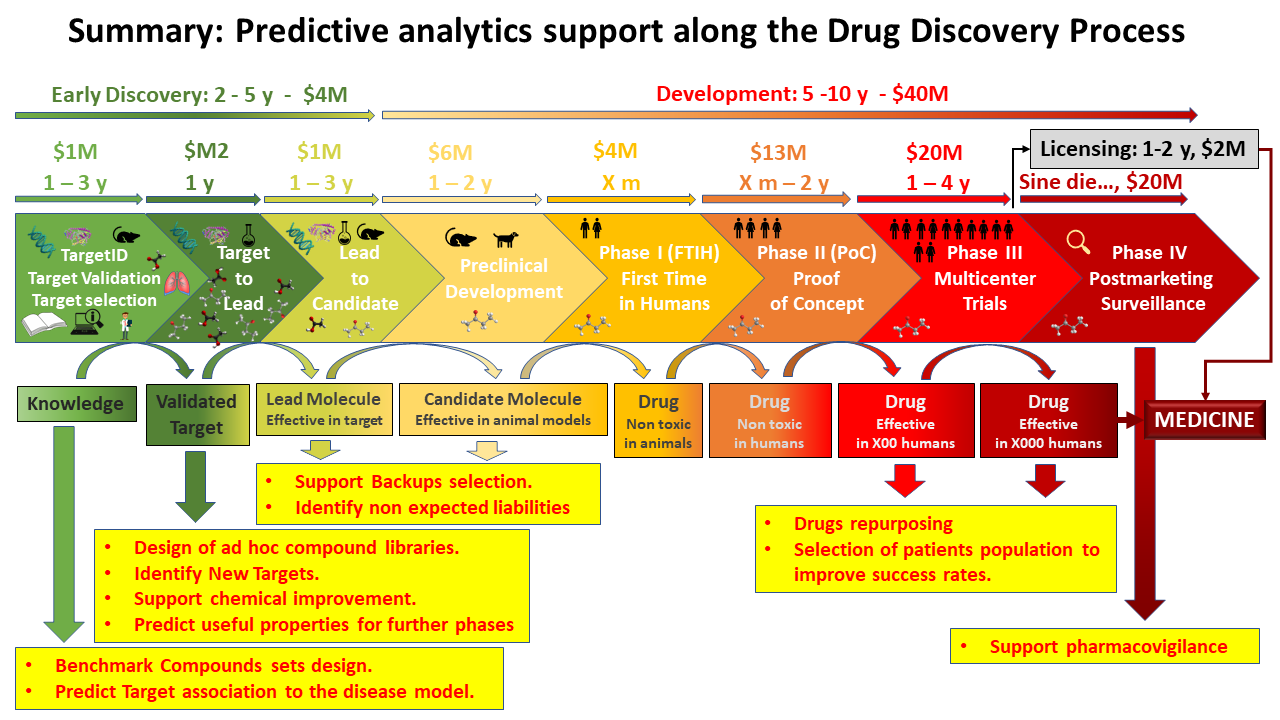 Register
We use cookies to ensure that we give you the best experience on our website. If you continue to use this site we will assume that you are happy with it.Ok